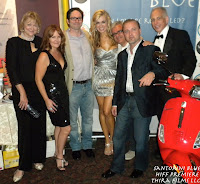 This summer if you are looking for romance, then upgrade your search from the Jersey Shore to the Hoboken International Film Festival. Love and drama are definitely circulating in Jersey. Whether you are ‘Snookie’ on the shore or yourself at the movies, love is in the air. Santorini Blue is an independent film that premiered at the Hoboken Film Festival June 5th at Ceder Lane Cinema in Teaneck, New Jersey. WeKnowTV had the opportunity to meet the actors after experiencing their performances on screen.
Despite it being an independent film, there were three recognizable actors that were featured in the movie, Ice T , Coco and Richard Belzer from Law & Order. Each had minor roles; however their appearances were refreshing and enough to make Santorini Blue a breakthrough hit! Bring a box of tissue, a big heart, a bowl of popcorn, and enjoy falling in love again. The plot begins with a married man amid a seemingly decent marriage played by (Matthew Panepinto). Internally distraught, he cheated on his seemingly faithful wife played by (Deirdre Lorenz), because he was envious of her (go figure! the male ego). He realizes his mistake and tries to break off the relationship with his mistress; however, his wife fines out and fled to Greece to escape the despair and stress at home. At this point, the husband is devastated because he ruined his marriage and desperately set out to win her back. The remainder of the movie consists of the different tactics he uses to manipulate the situation and to win her back with his charm and love. The plot thickens when his ‘mistress’ appears on the same Greek island and his wife finds out (ouch!). . His scheme to win his wife back continues, but love eventually makes its way back to the couple.
Off screen the duo was a hit at the premier, and in the mist of Sex and the City, the fashion was glamour. Deidre’s sparkling silver cocktail dress worn with studded heels was gorgeous. Matthew on the other hand looked very conservative with a similarly matching color scheme. When speaking with the actors, they explained that they had great chemistry on set which made filming a lot smoother and the acting more realistic. Whats more interesting, Deirdre Lorenz co-wrote and produced the movie through her film company (Thira Films), and Mattthew Panepinto also wrote and directed the film. So Far, the movie won the award for "The Best of the Festival" from the Hoboken international Film Festival, and 3rd place award again for "The Best of the Festival" at The 30th Annual Breckenridge Festival of Film. Both are audience awards, making them extremely special. In addition, the movie was nominated for Best Supporting Actor: Richard Belzer, Best Cinematography, and Best Actress: Deirdre Lorenz.
Of course, after every event come those crazy, TMZ-worthy after-parties. There was pumping music, unique drinks, and fashion-forward/friendly attendees. The after-party was held at Chakra also located in Teaneck, New Jersey. A unique “blue” Hawaiian-esque drink was served at the open bar that night. But, what’s crazy was the bartender did not know what he was serving. Yet, it became the house drink of the night; which we dubbed the “Blue Hawaiian Punch.”. After a fun-filled evening of popcorn, romance, and dancing, the night was a success. In homage to Siskel and Ebert, we give the movie four stars. If you are a sucker for love and happy endings, we recommend you catch this independent flick. Overall, for a romantic, it’s a must see.
Posted by We Know Tv Blog at 10:01 PM

WeKnow.TV is a fashion and entertainment media company based in New York. It was founded by and is owned and operated by Brian Green. Our mission is to offer a unique and insightful take on fashion, entertainment and lifestyle. We strive to both stimulate and educate you. WeKnow.TV’s Web site provides up-to-date information on fashion, beauty and lifestyle via blogs, reportage and videos. We cover fashion weeks, runway shows, red carpet events and more. We educate and inform you on what to wear, how to wear it and where to buy it. WeKnow.TV tells you where to shop, dine, travel and stay overnight. We help job seekers find work and employers find staffers. We also produce fashion layouts, commercials, documentaries and short films. WeKnow.TV producer Brian Green is inspired by both his island upbringing in Port-au-Prince, Haiti and his urban life in New York, where he has resided since 1990. He brings his passion for style and beauty and his concern for people’s welfare to his work as an actor, musician, photographer, film director, movie extra, event coordinator and volunteer. He started his photography business eight years ago, and began filming four years ago. His photography and videos reflect his personal vision. WeKnow.TV aims to know you and we want you to know us. Think of WeKnow.TV as the fashion and lifestyle news source that you check in with throughout your day. We encourage you to comment on our blog and Web site and to send us e-mails. We will do our best to respond to all inquiries.